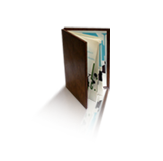 Formed from 17 joined sheets as one long strip, pasted onto heavy endboards of varnished wood, in a cloth slipcase. Silkscreened by Jim Birnie at Norwich School of Art on Heritage Rag acid-free paper.

I wrote and artworked the book in three parallel and overlapping lines that run its length disregarding the concertina folds. The centre line records a conversation that took place between ‘A’ and ‘B’. It stands as a proposition for a piece of sculpture, and also floats whisky on ‘an ocean made of paper’. The other two lines help or hinder the progress of this notion: all three lines are in expanded or condensed woodletter forms deployed to assist this book’s stammering progress from left to right.

I had two cases of woodletter, of different printing heights: one Anglo-American, an extra fatfaced serif; the other Didot, a Continental sans serif, very condensed and beautiful. They were so different in their respective fatness and thinness that they represented the polar ends of type design. As an act of cussedness I thought to do a book that brings the two together and see what happens. A formal problem to run ragged the poetry to come. Then I thought of an ocean made of paper; ‘think of an ocean, think of a notion’. The text followed a conversation between ‘A’ (me) and ‘B’ (Bruce Brown, in brown). We were discussing Borgesian convolutions. We began thus: A: ‘Think of a sea.’ B: ‘You mean the letter?’ A: ‘No an ocean made of paper…’ The conversation continued and I wrote it down. This was the first time I had generated text for a specific book. Up to that point the books had been slim volumes of verse attempting to break out of that mould.

Although the books vary in form and mood each is stamped with the very strong character of its creator whether or not he makes a direct appearance in either text or images. Some of the potent, alliterative incantations are addressed to ‘you’, with the poet cast in his ancient role as storyteller and seer, hinting at deeds done and truths overlooked in fragments of text which imply plots and wrongs masterminded on an epic scale.

In many of the books layers of narrative and images run parallel stories through the pages. This can be seen most clearly in ‘AbaB’… Three different type faces form parallel bands which stretch through the book, each horizontal line a different colour, scale and rhythm but linked in subject matter to one another. Its triumph is to show the reader that, by his own action of setting the pages in flowing motion, he has unconsciously echoed the tale he is simultaneously absorbing and by doing this the book binds its audience in a sudden, light-hearted intimacy.

‘AbaB’ has a casual conversation at its centre, but ‘A Knife Romance’ contains a measured exchange between kings – the words made virtually audible by varying the typeface – a build-up to battle in which one senses the cost will be vast… The narrative of this section is displayed in wedges in which the text appears to recede, rather as if it were written on tombstone and its pulsing tone underlines the phallic images of the silver-dusted knife which punctuates the rough-edged pages. At a quieter pitch the ‘widow’s song’ whispers through the book, a memorial to Campbell’s now dead mother and gently places the sorrows of a single family alongside those of the regal dynasties of the past. As the book ends the strands are drawn together by means of texts linked by colour to an image of the knife’s handle.

Man’s inhumanity to man is one of the themes that recurs in the books, whether private or public, contrived, accidental or instinctive, but the subject matter is usually well integrated with the process of making the volume itself… The title ‘Broken Rules and Double Crosses’, immediately presents two levels for interpretation – the suggestion that it will be a story of betrayal and a reference to the physical tools with which Campbell made the black crosses stamped on his huge sheets of vellum coloured paper… The text begins with an excavation and ends with a burial, moving in between through a slow dance of the possible contortions of a crucifix as its arms are articulated into various positions… It’s a sombre progress, flanked by two square prints made up of all the sections of lead type which were used to form the crosses. The text for ‘Broken Rules and Double Crosses’ adds Jewish and Islamic references to the Christian emblem which bears the main thrust of the work. One of these explains how ‘when the pious made such a thing as a carpet, a mistake or fault was insinuated into the design or manufacture in order that perfection be not achieved by deliberation, let alone chance.’ This was due to the belief that perfection was only permissible in the paradise to come, encouraging the wise to claim imperfection, ‘not only with humility but also confidence.’

In many of Campbell’s books there’s instant tension between the reined-in anger and dark foreboding of the text and images and the fact that the works are delicately made, elegant vehicles designed to be handled with care and respect. The human animal is demonstrated to be a destructive, misguided force by the action of a man expressing sorrow and mourning – and blame – by the gentlest of means. 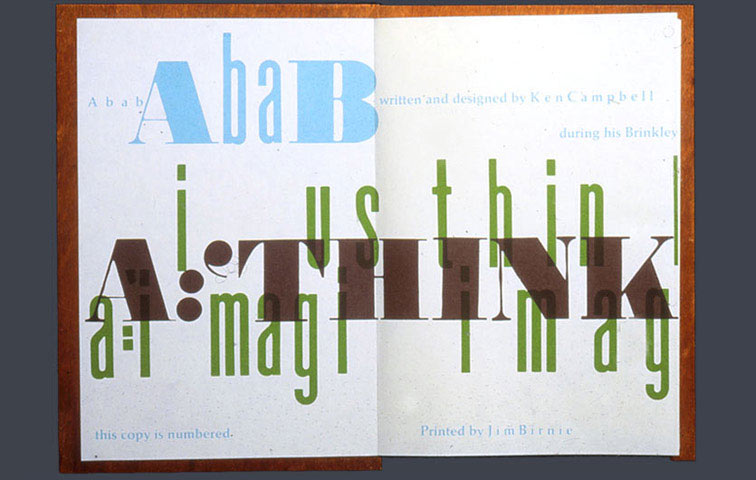 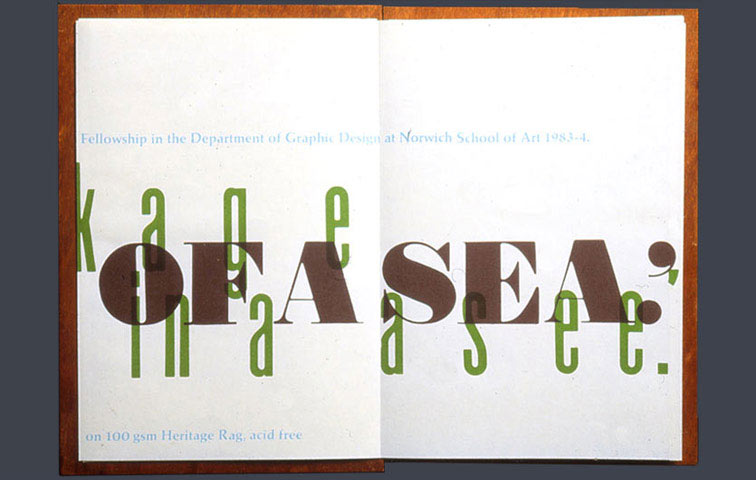 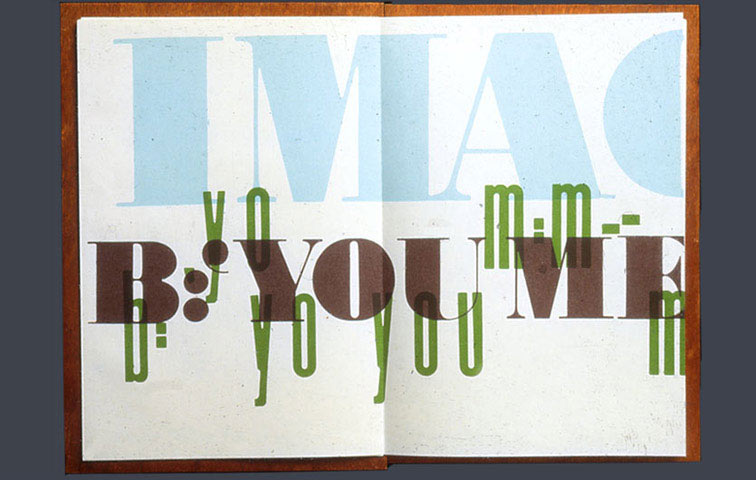 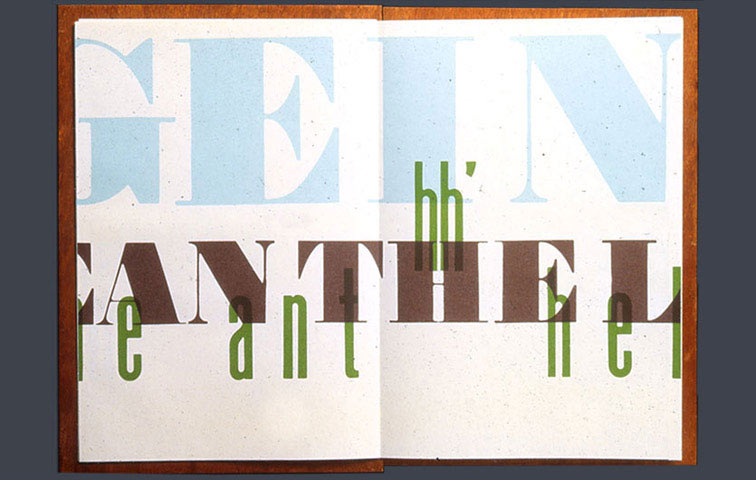 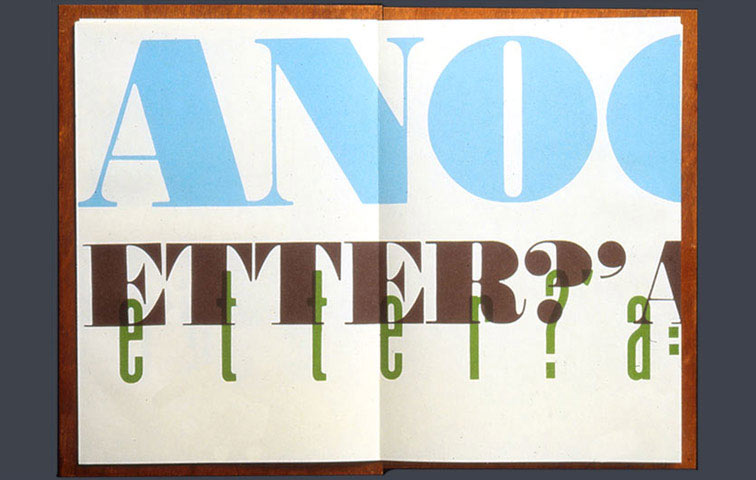 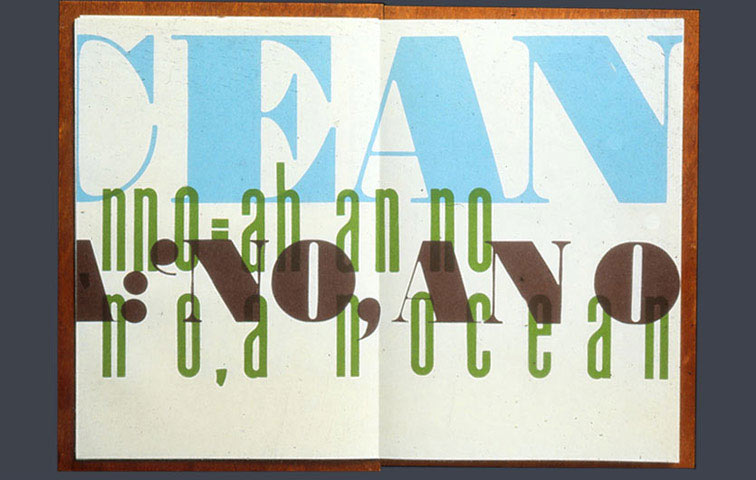 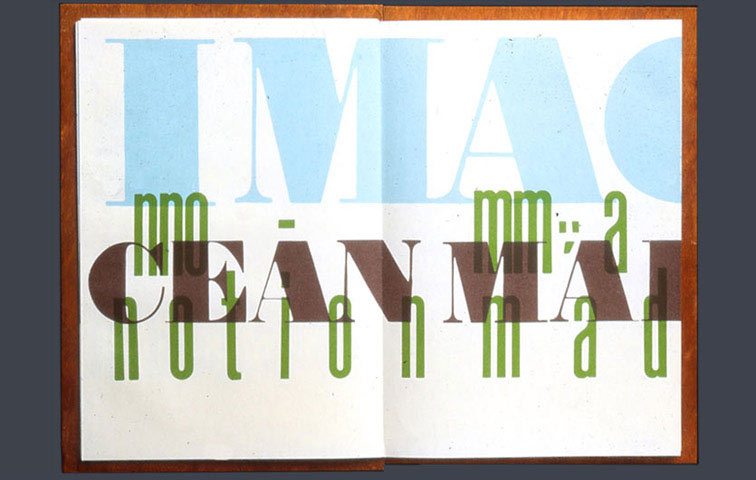 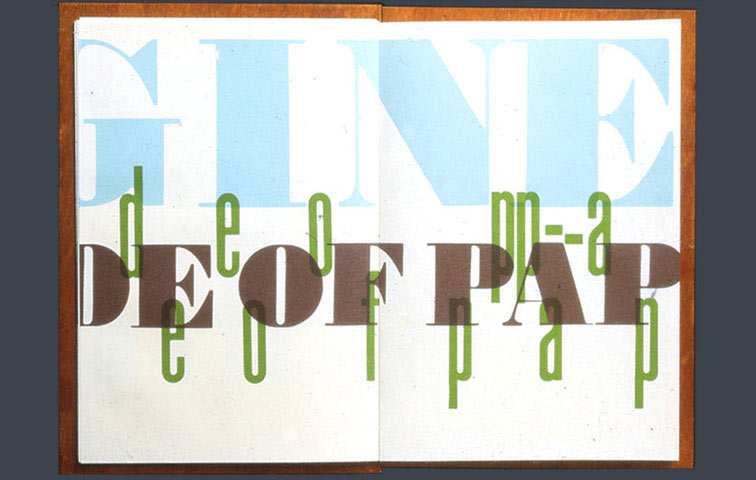 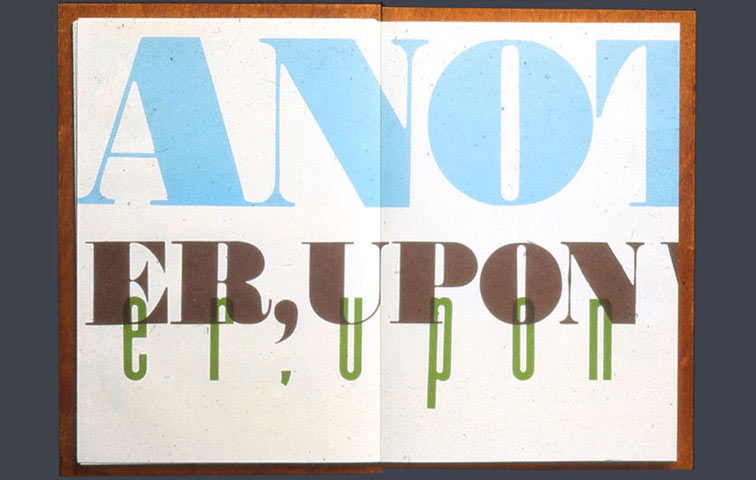 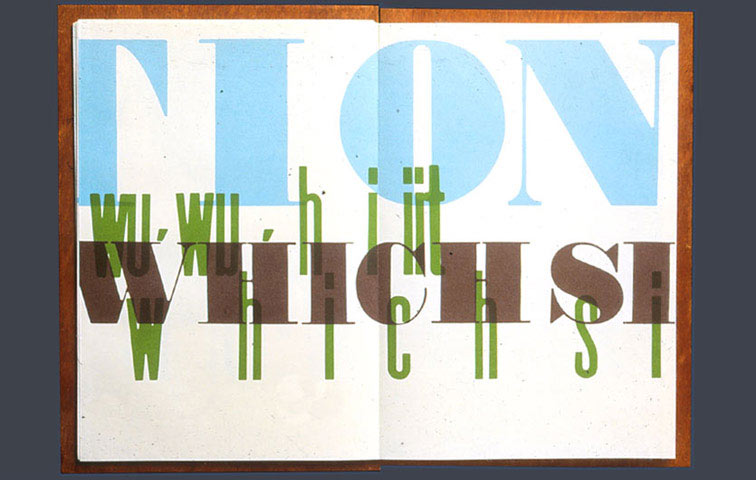