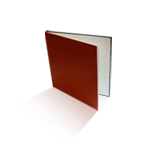 Printed letterpress from woodletter; 2-pica rules worked and turned in variations of orange and blue-black. Orange and blue cloth binding, dos-à-dos style, in black cloth slipcase. The poem was later printed as a poster in two versions.

‘HORSE’ carries a poem based on a Sanskrit song to the body of a horse as a model of the physical world, in which differing parts of the horse are related to associated parts of the universe (bone/star; heavens/flesh). The original song came from a herdsman people in eastern Asia who worshipped the horse and would, at springtime, set a young stallion to wander where it would throughout the year. Where the horse went, so did the people with whatever consequence for their new-found neighbours. At the end of the year the horse was sacrificed, and the cycle repeated.

Line by line I alternated the leading category of horse or universe. I had re-formed this song into a poem set about a central spine: a visual chant, a kind of concrete poem with an eye and an ear for repetition and rhythm.

The text is printed from both ends (also beginnings) of the book, one line in dark blue, the other orange. So the twice-printed poem interlaces with itself: this to allow resonances extra to the solitary song. The page opening is quartered by thick, metal rules in the same blue and orange. The woodletter is large and crude; the presswork brutal – a very physical, sculptural book printed con brio on a Vandercook proofing press, and at the limits of that fine machine’s capacity. ‘HORSE’ moves at a racy gallop ‘somewhere on the frontiers of taste.’