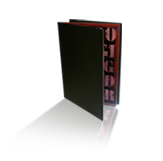 Polychrome letterpress and handwork deploying a raised mounting board, lead type, woodletter, zinc and polymer plates and zinc stencils. Some imagery is gained through digital manipulation. Contained in a drop-backed box.

‘The Word Returned’ is two books in one, dos-à-dos, back to back. The books share similar design and content. Sometimes what is on the left in one is on the right in the other; what is black in one is white in the other; what is up in one is down in the other; and what is obscure in one is readable in the other. When the books are turned they turn into their other selves: they rotate. There is no end to process unless that end is desired. A book with no beginning, a book with no ending. The Celtic custom of rejoicing at death and mourning at birth is echoed in the dos-à-dos form of the book. My poem ‘Dear Judas’ is dedicated to my family, those people who jump out of rocks. Other brief texts hint at Adam as Golem in the earth, and the release and return of a dying Gaul to his statue’s marbled fount.

A visit to the Madrid flea market in 1992 yielded a near-complete set of zinc stencil letters, about 4 inches high. Graphic designers have used them to suggest integrity, speed and informality. Stencil letters, therefore, have become a graphic cliché and clichés should either be ignored, or attacked and transformed. I realised that if you turned them over they would be the right way round to print from, and could be constrained in the furniture of the press. I decided to print ‘Dear Judas’ in this found stencil. The margins on the stencils needed to be overprinted to save space and their limited number demanded that the poem be printed one letter at a time. Multiplied by 50 to gain the edition, and twice for the book to be dos-à-dos: and that multiplied by the number of letters in the poem, called for the cranking of my one-ton FAG proofer over 66,000 times and that just for the poem.

A background of darkness is printed from a raised wooden baseboard in which a comet’s tail from the earlier book, ‘Night Feet on Earth’, was found impressed. I scanned the image, turned it into a photographic image and reflected it, to make two angels’ wings that fly in from left and right after their enlarged and pixelated edges have given a cityscape on previous pages. They attempt to enfold a Jewish blessing.

The baseboard is made of blocks of hardwood which, when raised up and printed, might be read as mechanised geological striations. The spreads are printed with alternating sides of this board so that the paper becomes almost a two-dimensional representation of the board as earth in which the poem and the body of Adam are, by the thunderous ritual of letterpress printing, re-interred.

The Golem, Doctor Faustus, the Sorcerer’s Apprentice and Frankenstein may be seen as extensions of Adam moulded, Adam gone wrong and modern man made. ‘The Word Returned’ folds him back into his soil to think again. 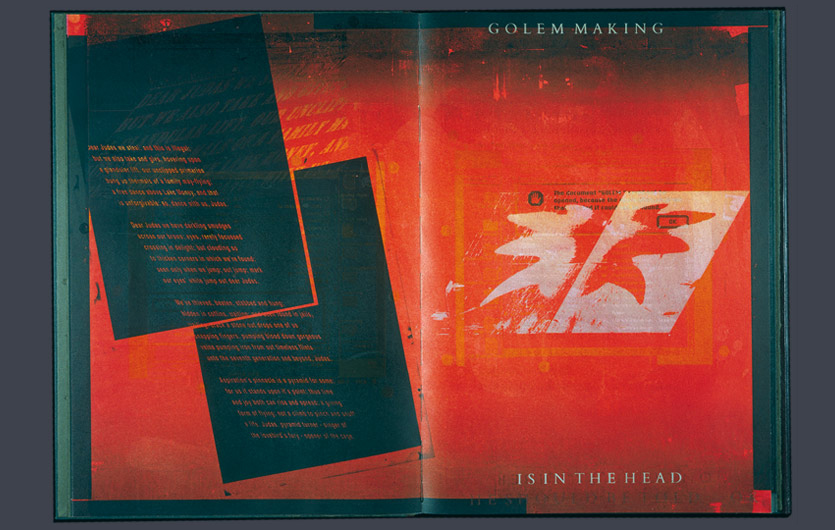 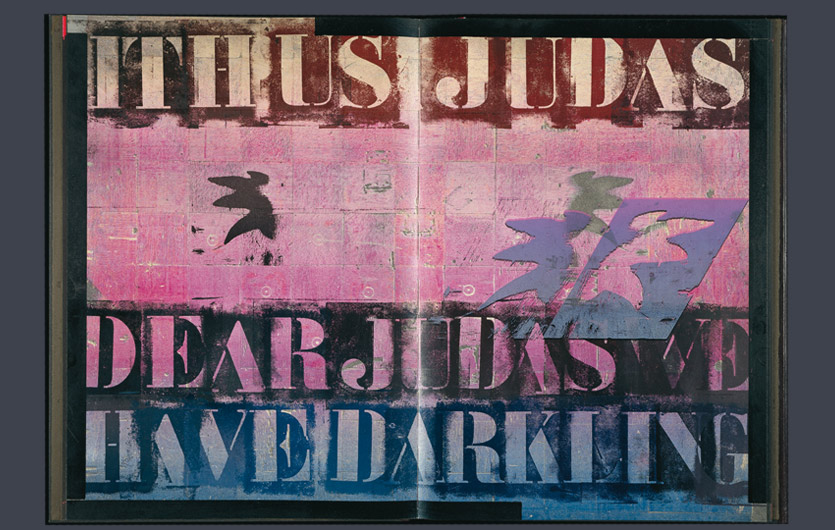 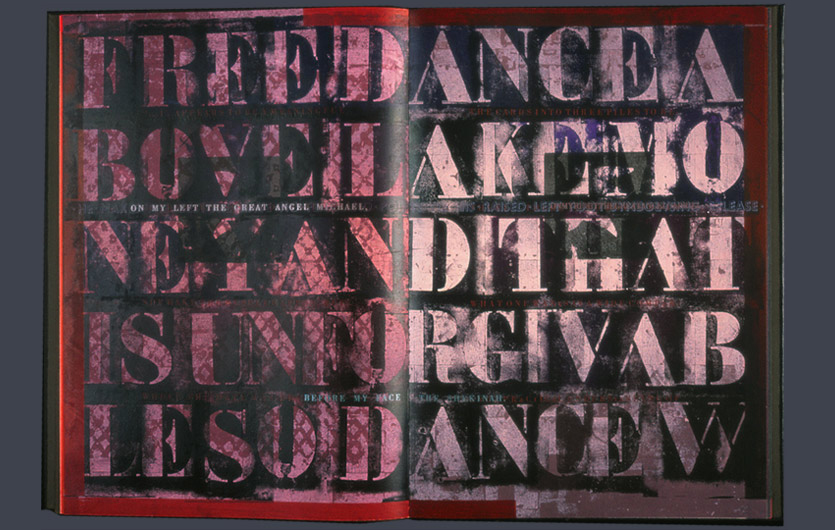 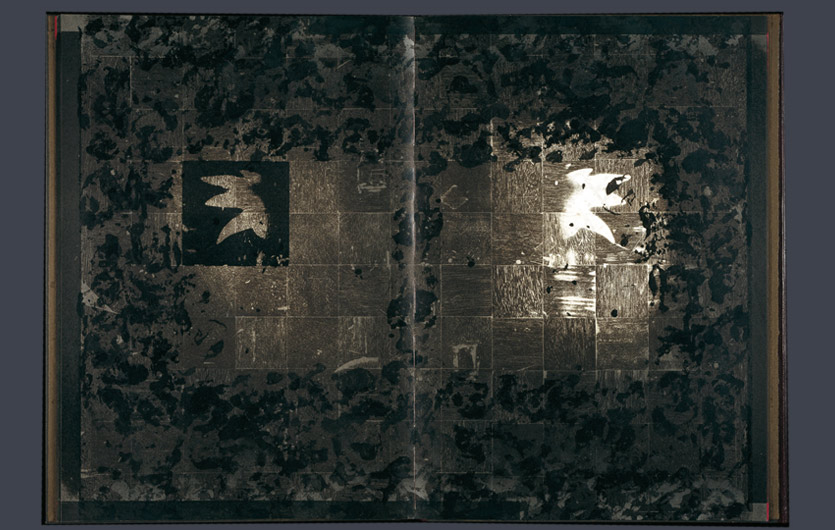 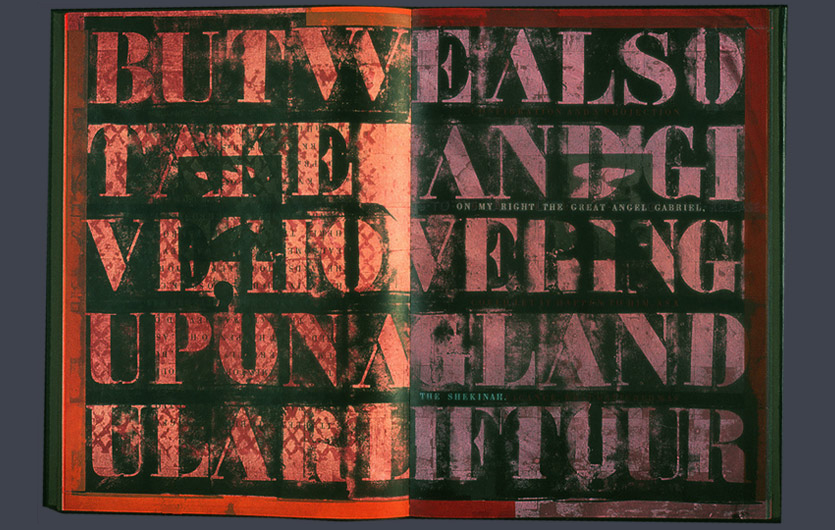 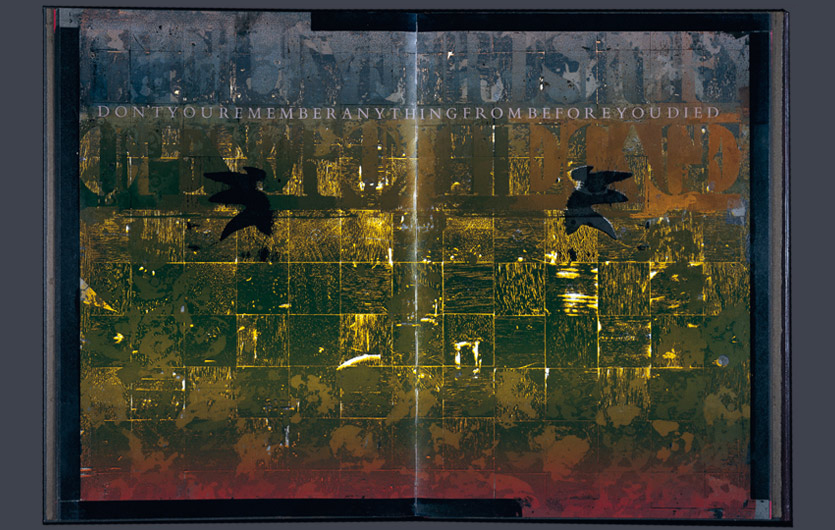 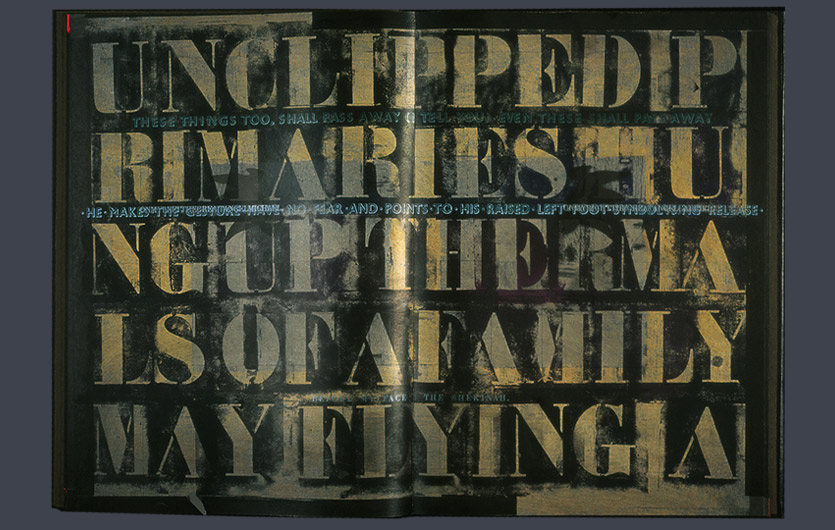 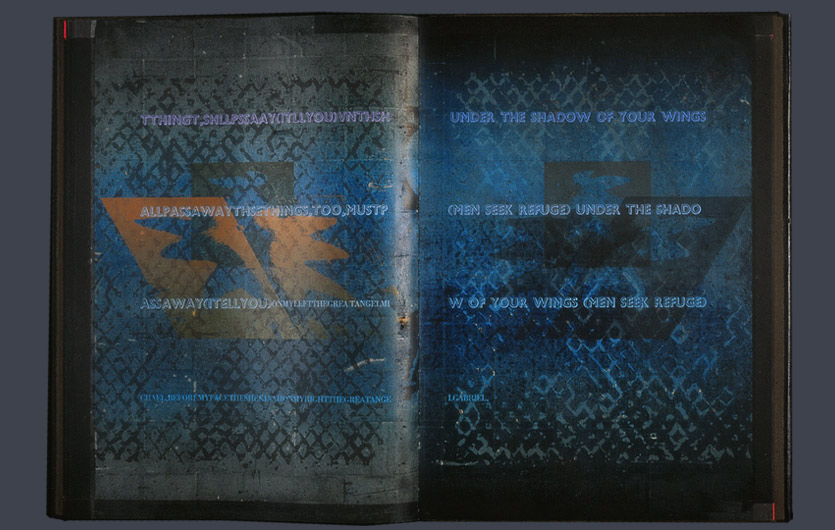 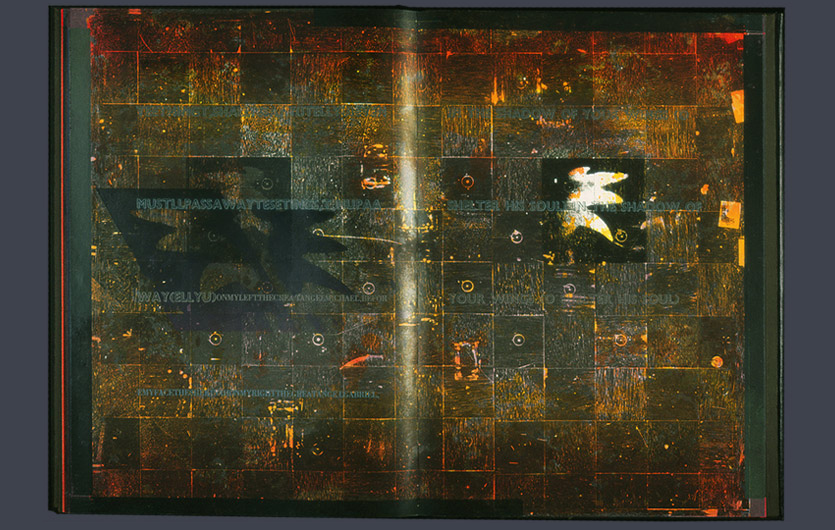 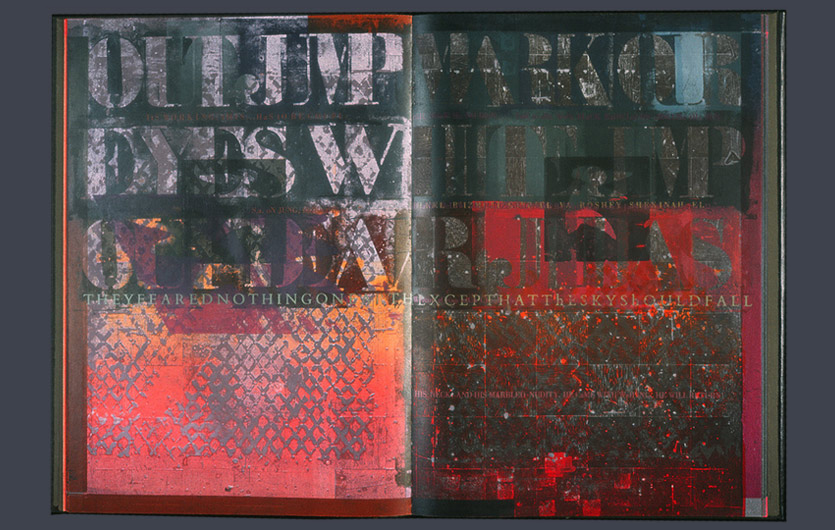 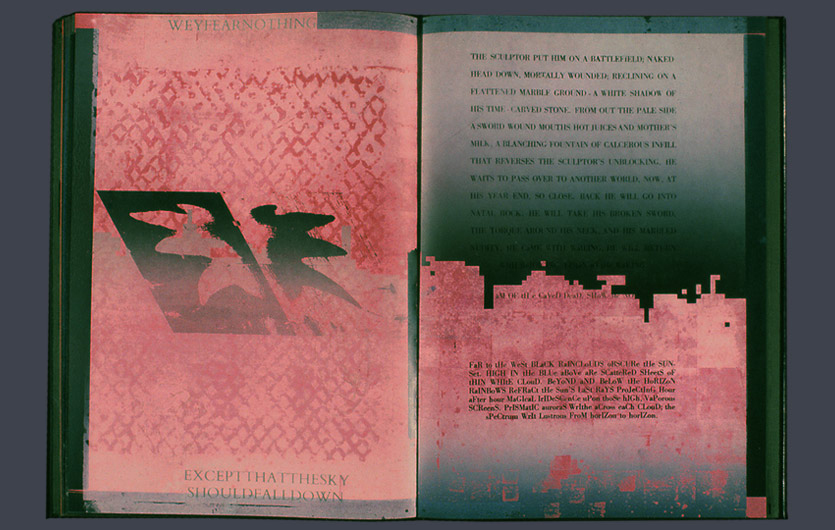 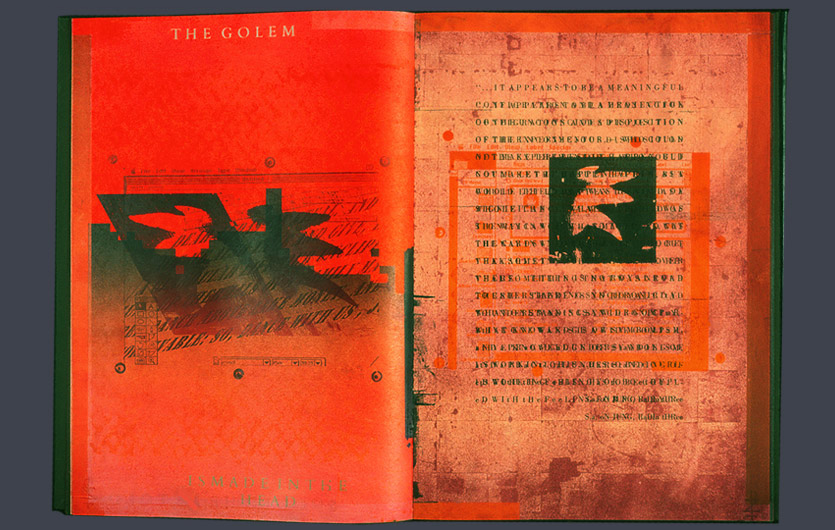 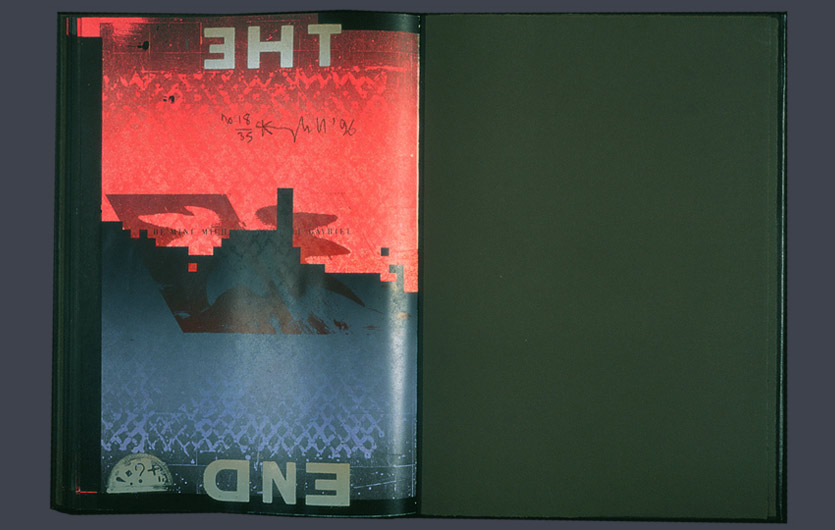 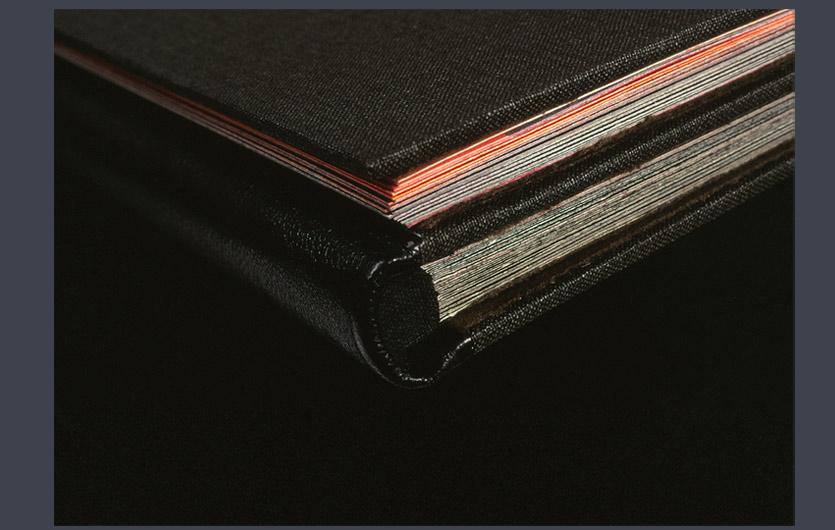